Why was my flag for "not an answer" declined?

I've been declining a lot of flags about "not an answer" and wanted to ask a straw question to explain why. Pretend I just had my flag declined and am here to ask WTF!?

TL;DR - moderators generally don't delete posts until they have several down votes or constructive comments if there's even a hint of an answer contained in the post.

I'm seeing a lot of "not an answer" flags when there are bad answers, answers that lack a reference, wrong answers, or answers that people presumably disagree with or have a pet peeve with certain words.

On the moderation side, here is how we tend to process things:

Before handling a flag of "not an answer", we pause to look critically and assess the question. Since we want to optimize for questions that allow for (or perhaps even demand) good answers - everyone should be more interested in fixing the question if that's the real problem. Rather than delete an answer that points out the question needs help, let's use the tools to fix a question or guide someone that is attempting to move the discussion forward and only delete an answer if it truly is not of better quality than the question itself.

As moderators, we try to keep some order in terms of deleting things that are actually offensive, mean spirited or blatant spam (spam - n. advertising that is either repetitive or totally not relating to the question) . And we are also here to ensure that criticism of specific choices or functions is constructive as opposed to be unsubstantiated accusations or blowing off steam at someone else's expense, so be sure to use the correct flag if that's your primary complaint with a specific post.

Here's a great post that should be flagged as not an answer.

The only way that would be an answer is if someone asked an off-topic question and we would want a flag on the question since I can't really blame the answerer for a mis-placed question.

Here is what a moderator sees when declining a flag when "not an answer" is in play: 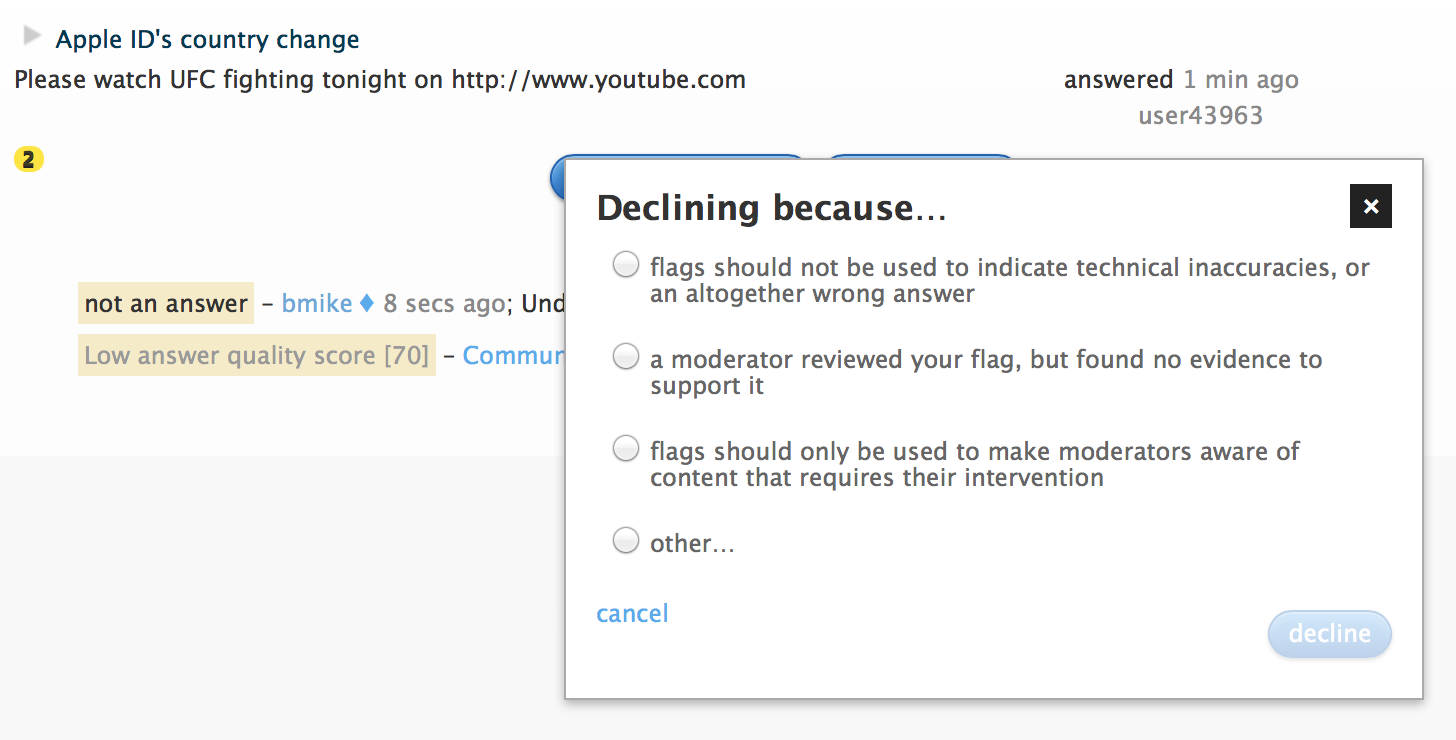 So, as you can see, even if an answer is totally wrong, that's not enough for us to delete it in almost all cases. It has to be unsaveable by an edit and we like to see that the bad answer has a down vote or two and hopefully a constructive comment before we like to step in and summarily delete an answer. Even totally wrong answers with a polite, concrete rebuttal is of great use to the community.

Think how many people with a similar wrong answer in their mind could be helped if we kept all the wrong answers online, searchable, but properly down-voted and explained as to how and why the post is incorrect.

Since our site has so few trusted users, the reopen queue is not maintained well, and when a moderator deletes something, it's extremely rare that anyone will see it, let alone have a chance to fix it.

The next time you flag something as "not an answer" - do a check to see if it can instead be voted / commented if the poster has clearly tried to move the discussion forward. Not all answers are right from the get-go, but we need to give new users and the collaborative editing process a chance for some answers rather than just deleting them outright. If a post shows any effort to help others learn, it should not be flagged or deleted.

If you're reading to this point, realize that when you don't comment and don't vote and don't edit before you flag a post as not an answer, you haven't shown any care and just tossed your perceived problem to the moderator team to handle. Moderating is what we signed up to do as volunteers, but the reality is that when 30 flags for NAA lack any effort at community moderation, your flag however well intentioned, can become a problem.

We'd like to avoid patterns of flagging things as NAA without performing any moderation of the posts in question. Try to not load the flag queue with things that you can start to resolve if the community has given you enough reputation to start moderating these posts via vote, comment and edit privileges.

As a counterpoint (I would just comment, but I can't put images in comments):

This is what we see on the flagging page:

Under "it is not an answer" we see "It should possibly be an edit, a comment, another question, or deleted altogether". It sounds like you are considering all the flags as requests for deletion when the flagging page mentions 3 other options.

I will try to start commenting and voting rather than flagging (except for spam) but I am confused about the phrasing the flagging interface offers.

I think a tangential confusion stems from new users not being able to comment and so they go to the answer field (or maybe they don't even see the comment option, but even if they did it isn't an option)

and yes, this should probably be flagged because it isn't an answer :D

I tend to drop a line into the 'other' category if there is some doubt, if the post needs simply a more experienced eye cast over it for confirmation, or if it definitely needs migrating to the question body itself; a task I'm assuming only mods can do.

I do wish there was a sub-heading for 'not an answer' to split the 3 possibilities - comment, new question, delete - because 'not an answer' in itself is a tad vague.
I'm fully aware that being a lousy answer doesn't qualify it for deletion, so I tend to down-vote &/or post a comment on those; but some of them are frankly far less clear than a question we would have all flagged to close within an hour.

Also, being an 'answer' there's no close or equivalent voting available, unless [I think] it was already in the LQP review queue (correct me if I'm wrong on that), so the only option sometimes is to throw it into the mod queue.

I constantly keep my copy/paste cheat-sheet of the 'close options' open on my desktop to throw into some of the more obvious disasters ;-)

Not the answer you're looking for? Browse other questions tagged discussion faq flagging .

13
Conspiracy theory answer flagged, disputed
6
The policy on flagging link-only answers should be made much more obvious
4
Can we fix the answers as comments problem?
5
How do I delete an answer which is link only?
3
Flagging best practices
1
DIscussion: Flags
2
Non-Answer Declined Flag, but Author agrees with me!
0
Should we flag different on Ask Different?

9
Site traffic -> new users -> an influx of invalid spam flags
6
What is the average helpful/declined flag rate?
15
Technically Inaccurate or Altogether Wrong Answers
6
Why are my comment flags declined?
7
Why was this particular "not an answer" flag declined?
0
Why are comment flags declined if comments are obsolete and the obsolete flag was used?
2
Non-Answer Declined Flag, but Author agrees with me!