How to paste images into the site?

The Image button on this site gives the dialogue below, which mentions the ability to paste in an image.

However, I can't get this to work in Safari (6.0.4) on OS X (10.8.3). I can drag a file in, but I'd like to be able to use cmd-shift-ctrl-4 to put a screenshot on the clipboard, then paste that in, because that feels a little faster. However, pressing cmd-v seems to do nothing.

Only that you need to save the file to disk before uploading it to the site. The browser can't upload the contents of your system clipboard to imgur, which is where images end up getting hosted for the StackExchange network.

Here's how I'd like this StackExchange feature to work (noted here as suggested by @bmike, since the question is now tagged as a bug):

Expected: the screenshot appears in the editor, as it would if I'd saved it to a file and then dragged it in. This is what happens in the Chrome browser.

Actual: at step 4, the Safari Edit > Paste menu option is greyed out, and Safari beeps.

I don't know if this is a Safari or a StackExchange issue, but I would find this process a little quicker and more satisfying than saving a file to local disk before uploading.

If it doesn't work, this sounds like a Safari issue. Running those steps just worked in Chrome. After I hit paste, the dialog box changed to this: 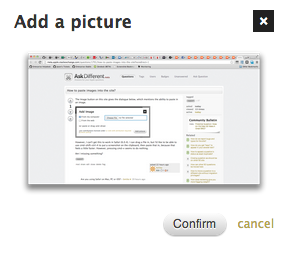 Which allowed me to click confirm and upload the image. You may want to click within the whitespace of the dialog box in order to ensure that it has focus, and then hit ⌘v

My initial reaction is that this is a Safari issue. It's not just "you can't paste stuff in Safari", because Safari purportedly supports the Javascript Cliboard APIs. I've marked this as [status-review] until I can pin this down for sure and will update this answer when I have something more definitive to share.

This does appear to be a browser issue. I've reproduced the described behavior. I also tried on imgur to see if it would respond in the same way, and it does: dong...nothing happens. I experimented a bit in jsfiddle to see if the event is handled as documented, and I don't think it is. I'll keep looking into this for a while, but unless something I didn't already know is brought to my attention, I expect to status-decline this later this week.

Not the answer you're looking for? Browse other questions tagged bug support status-declined .

3
How do we report bugs and typos for the site?
7
Typo on the “header” for the site
6
Adding hyperlinks fails to allow cut and paste
4
Why can't I embed images at exactly 10 reputation?
6
Resize images programmatically
5
Bug in <img> tag for specifying height to reduce retina images
1
How do I answer questions on this site?
6
How do I get a blog post to show up in the site sidebar?
8
How does (or will) the Jobs tab on the Ask Different site work?