I'm stuck with this question:

I wonder how I should act in the first place; why the post-close edits were reverted if asked for, and why last three bullets were removed from my question.

I would have rather cut more bullet points, but as you can see, I took quite a cut of text from your question to reduce the scope and make it less broad: 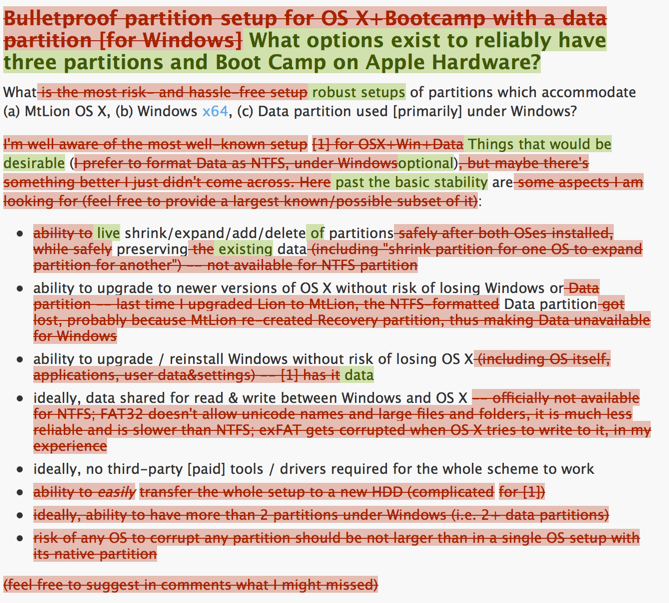 From our help page on closed questions you can see why I removed several bullet points to eliminate the "too broad" problem that I saw with the question.

Specifically, how to transfer an entire mac to a new system is quite a broad question in and of itself. Here you complicate things by having no clear picture of what you actually need. I saw your question as asking best practice to set things up - based on how that is answered, you might be able to ask how to back up each proposed "answer" as a follow on question.

I still think the question is quite broad since it seems to be three questions:

Basically, the more narrow of a problem you can phrase, the more likely it will be useful to a wide variety of people. Having small, thought through, clear questions allows you and others to chain together facts and answers to make a nice summary post / question should you find some conflict between the individual pieces. As it stands, I would tend to close a question that was asked as yours is now, but I wanted to reopen it to see how it plays out and whether we can get some answers that help you since you did show effort to edit it as we asked.

In essence, the "reversion" was that we asked you to narrow the question and to some extent you broadened it - so rather than ask you to go back and do your work over, I attempted to show what I saw as an improvement. Let's see what other moderators think - if they could edit or perhaps offer constructive criticism to get a) you to understand why the edits happened b) a question that's likely to get some answers.

Not the answer you're looking for? Browse other questions tagged discussion support .

5
Requesting re-open votes for a question
3
Asking technical question, getting advice about EULA
4
Are we bored of “What screen resolutions can my Mac XYZ support?”
3
Migration rejection followed by repost on original site closed as duplicate, how do I proceed?
13
Proposal to change the 'Ask Different' site description on the Stack Exchange list of sites
7
Poll: Ask Different Blog
10
Do my eyes deceive me? Lots of people lost a lot of reputation today