I flagged a post as "It could give rise to opinion based answers" but my flag was declined by a moderator. While I was checking out the questions again, I noticed the post was put on hold for the same reason I had flagged the post in the first place.

Why did this happen? 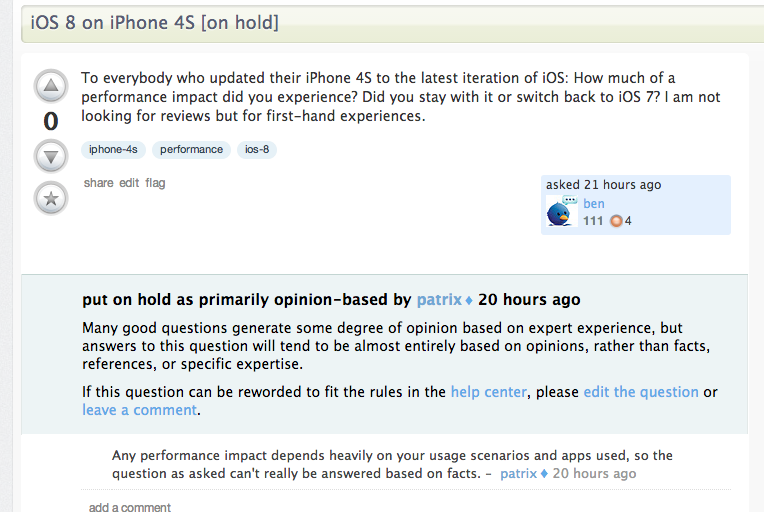 There are seven moderators. They don't always come to the same conclusions. The system doesn't provide a way to reverse a ruling on a flag. We can go back and change the outcome (open a post that had been closed or vice versa), but the original ruling on the flag stays, even if it happened because someone clicked in the wrong place.

In this case, two volunteer moderators on two different continents who have never met each other in person read a flag on a post and came to different conclusions, without even realizing until after the fact that they disagreed with each other. What is remarkable, actually, is how consistent rulings often are.

But moderators sometimes even overrule themselves. If someone flags something, a moderator reads the flag and decides how to handle it, which might involve declining the flag. If later, the same person disagrees win the moderator's choice to decline the flag and flags the post again, the same moderator might read the second flag, be persuaded by what the person wrote, and act on it.

In this case, by the way, I believe that asking users to report the facts of their firsthand experience is the definition of "not an opinion." But I also see how the question could turn into an invitation for people to rant about how Apple ruined their phones with iOS 8, and how this is the. worst Update Ever and Never Would Have Happened If Steve Were Still Here (etc).

This is all an imprecise science, but the point is that while we can reverse what is done to a post, we cannot reverse the decision we made about whether a flag was helpful or not.

To be honest I didn't notice that there was already a declined flag on the question until a few hours after I closed it. I probably wouldn't have closed it if I would have noticed that earlier.

Having said that, I still think that the question as asked doesn't really help and should at least be more specific about usage scenarios, apps etc.

1
Why doesn't AskDifferent Reviews have tests?
15
Technically Inaccurate or Altogether Wrong Answers
0
Accepted, but wrong answer - question marked as duplicate to the wrong answer
6
Why are my comment flags declined?
0
Should we flag different on Ask Different?
3
Migration rejection followed by repost on original site closed as duplicate, how do I proceed?
5
So can someone tell me what's wrong with the question I posted below?
7
Definition of the “zoom” tag