Why was this question with 9 upvotes closed as “”Basic Customer Support or questions asking to recommendation"?

I found out that the question Equivalent of Dragon NaturallySpeaking's HeardWord function in Dragon Dictate 4 got closed two months ago (since no comment was left, I didn't receive any notification).

The question is clearly about Apple software, was upvoted 9 times, starred twice and had 300 views.

The mentioned reason is vague:

"Basic Customer Support or questions asking to recommend or find off-site resources (Mac/book/software/tutorial) are off-topic for Ask Different as they tend to attract opinionated answers and spam. Instead, edit to clearly describe your problem and the research done so far to solve it." – patrix

The question is clearly not about basic customer support (see number of upvotes and number of answers), and it is not asking for a recommendation.

So why was this question closed?

Here was a copy of the question:

In Dragon NaturallySpeaking's Advanced Scripting Command on Windows, HeardWord is a function that enables Dragon NaturallySpeaking to behave as if the specified word, word sequence, or voice command was received by the recognizer. HeardWord can be used to create a command that executes a series of other commands, or that has the same function as an existing command but a different name.

Here is an example to type a closing remark, in bold type, at the end of a document. 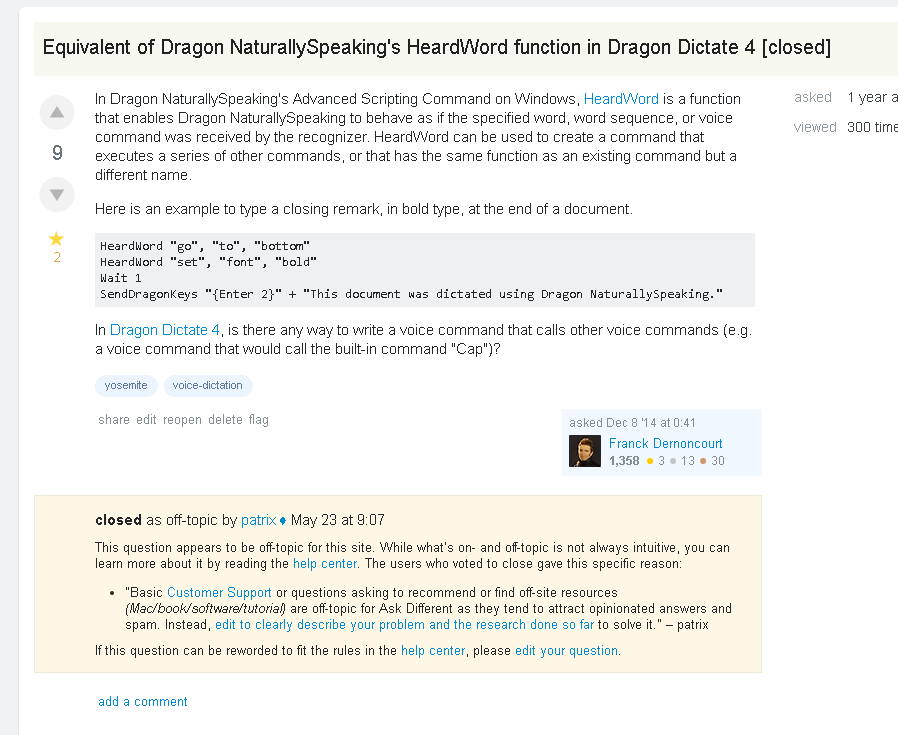 I put the question on hold because it basically covers a topic which can (and IMHO) should be addressed to Dragon's support team (or forum) first.

From this answer to Why we're not customer support for [company X or product Y]:

We're not here to act as customer support on any company's behalf.

That's not our mission. We're here to help you learn how to interpret vague or conflicting behaviors once you've exhausted the normal support channels and documented that effort in your question. Your post here will live here for years - useful posts will drown amongst thousands of "help me please" posts with no detail and no effort to troubleshoot documented in them.

Given Dragon is multi-platform and the question is about the software I think the question would be better suited for SuperUser.com -- there doesn't appear to be anything Apple-specific about the question.

Not the answer you're looking for? Browse other questions tagged discussion closed-questions .

0
Why was my question closed?
11
Allow “How to Learn Objective-C”-Type Questions?
5
Sales Figures are Off Topic?
1
Rephrase 'Basic Customer Support' off-topic wording
2
Is a revision required to the “What topics can I ask about here?” page in the Help Center?
7
Why was my question closed asking why Apple didn’t implement a hardware feature in a specific device?
16
New “No Research” close reason?
8
Why are Microsoft and Adobe apps counted as being about Apple, but Facebook apps aren't?
3
Why was this question not closed?
4
Why was this question closed?