We rolled out the new site theme for Ask Different. It is now live.

If you're like, "What the heck are you talking about?", then you should read the Meta Stack Exchange post entitled Rollout of new network site themes (and maybe the posts it links to for the full background).

You are one of the first sites to get a new, unified theme. I previously posted the designs for theme in meta. The feedback given to that post was considered prior to rolling out the theme. Please help us look for issues/bugs and post the details (including images where needed) as an answer below.

If you have concerns or issues regarding the left nav then this Meta Stack Exchange post is the right place for feedback. If you have issues with any functionality that is unrelated to the new theme, then please post a new question.

We've lost the nice Apple-specific font, by the looks of it, looks exactly like SuperUser now...
boxes round the headers, increasing the wasted space & drawing the eye away from the actual questions,
'Ask Question' stuck out all on its own
& lovely new yellow highlights for watched topics:/

Edit:
Long term I gave up on the yellow highlights altogether, unwatched all tags & ad-blocked the watched tag sections entirely. Too much yellow. 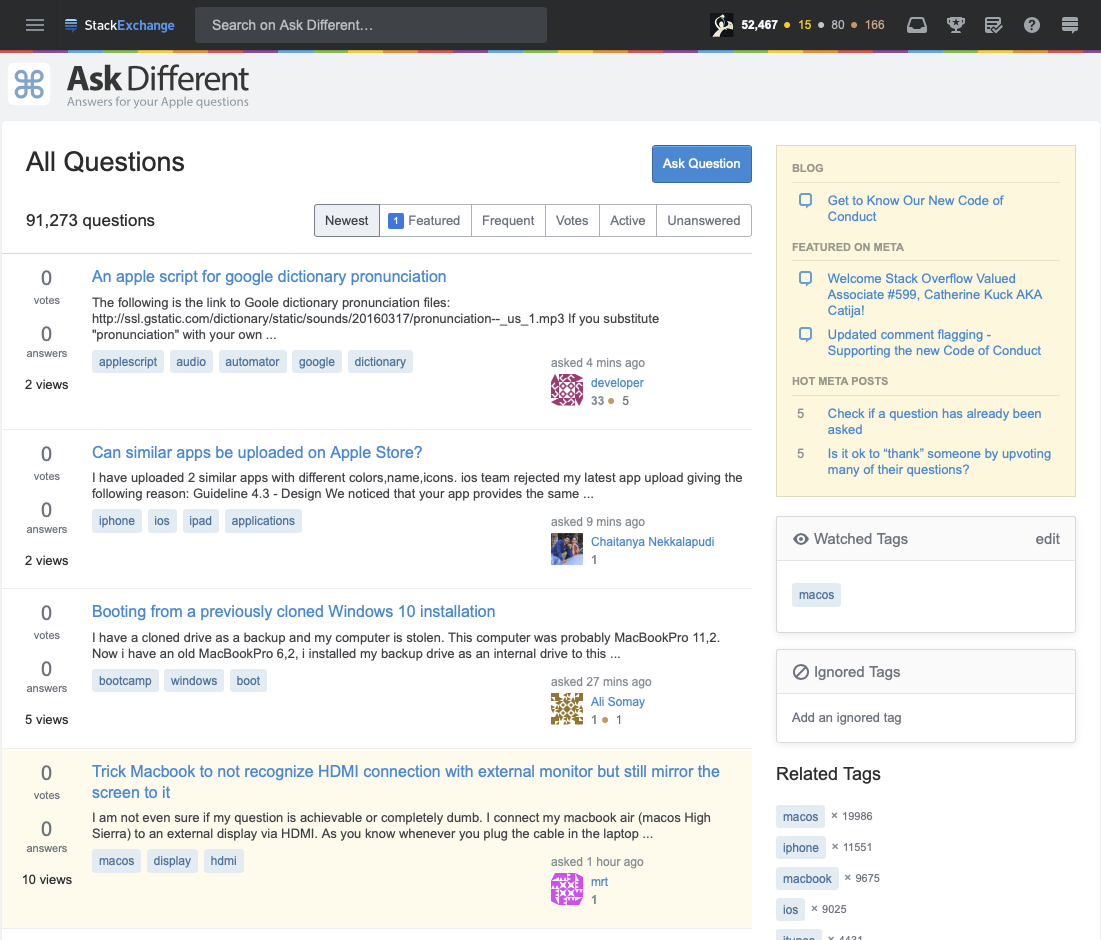 The themeless beta sites look better than the themed ones now

...and, after comments, I just noticed more 'loveliness'
not only do we have the permanent grey upvote/flag icons I already moaned about,
we also now have 1992-style underlined links ! 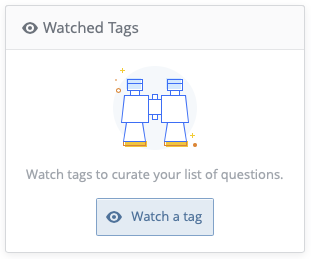 & of course, I switched off the left-nav immediately.

Would it not have been better consolidating it with the already "full of random bits" right side?
It has precedent for being the space to fit all the bits that don't readily fit anywhere else - they have to go somewhere & that's as good as any, imo.

I did my own mockup... but it didn't take me long to realise all I was doing was putting most of it back where it was [& getting rid of the yellow] though I had to pull a lot of elements from the beta picture as they're gone from the site in their older form. 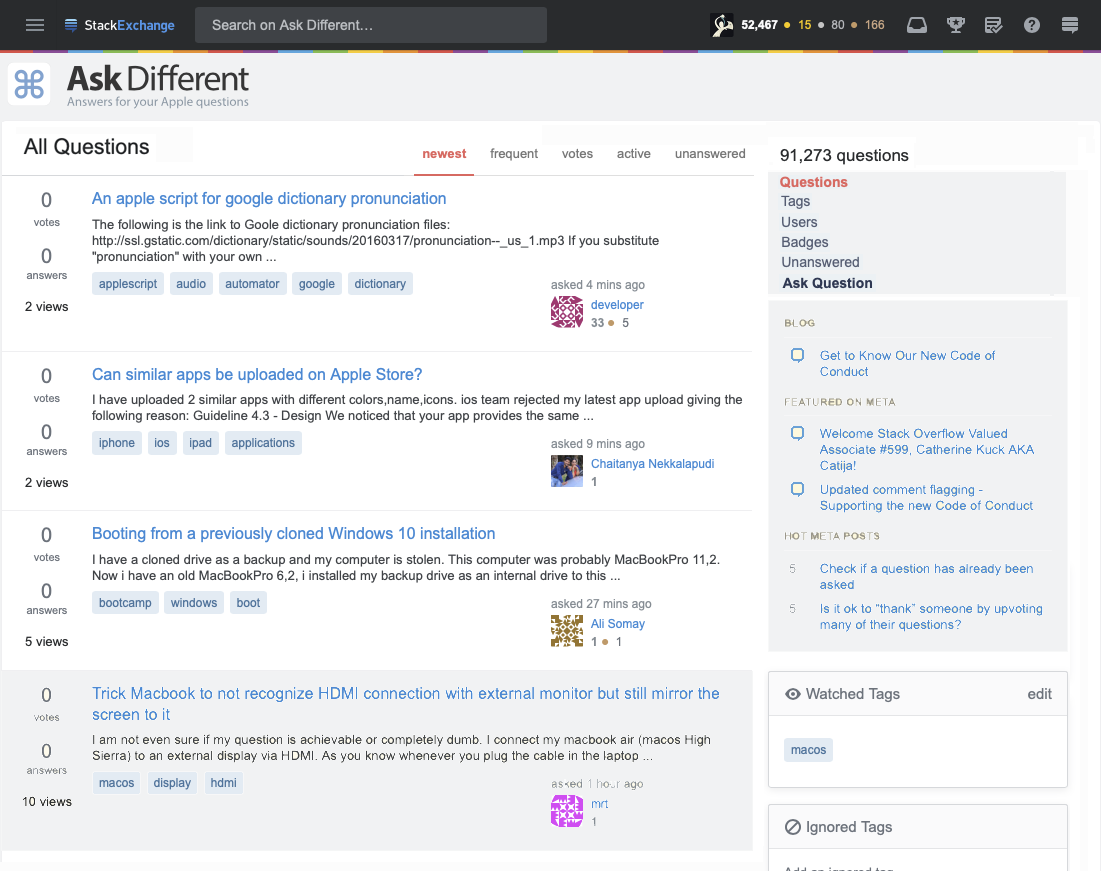 Having Arial before Helvetica in the font stack feels very wrong for an Apple-oriented website.

These changes have lost so many intricacies of the site.

Arial doesn't fit at all with anything macOS. Helvetica is an improvement, but the system font is preferable on macOS.

The tags don't have properly rounded corners any more, instantly losing the uniqueness of them to this site.

The blue highlight has been replaced with some sort of yellow that doesn't fit with anything else on the site.

Why are these raised? Why so much whitespace? 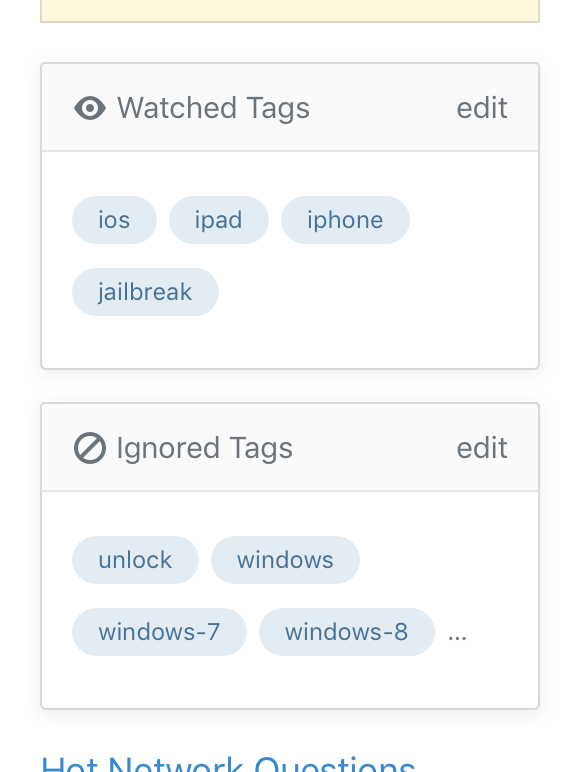 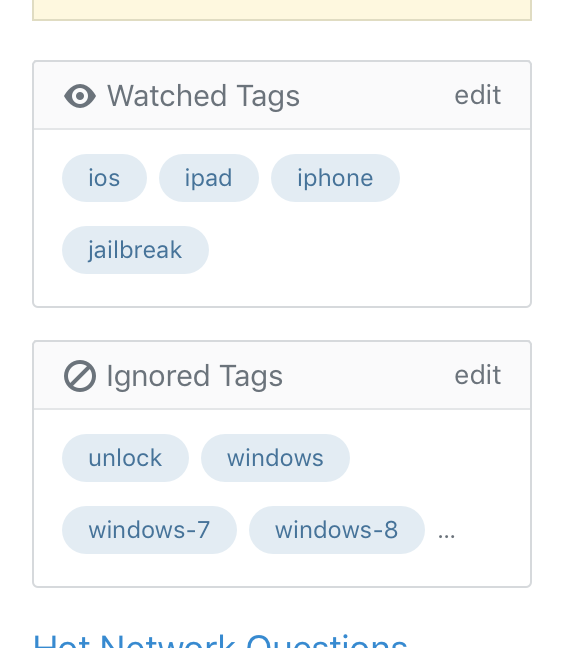 Ok. I like it, quite a lot - I get some have strong feelings on font faces, but the content so far is readable to me and the changes / animations are clear and useful to me. Especially the left side nav that can be on or off as I please. One minor quibble is an odd (to me) pixel shadow on the rainbow. I thought I had a problem with my screen initially until I realized that was intentional.

And the ff ligature and title kerning makes me swoon

With the left nav bar turned off, the top of the screen looks a bit strange IMHO:

Maybe the distance between the top bar and the site logo/title is a bit too small, or there are just too many different fonts used in the various UI elements, or the white space around "Top Questions" is too big, hard to say.

Could one of the UI expert have a look at this?

To second bmike‘s idea of moving the „Ask Question“ button: At least on the iPad the button is in a very odd place if you look at a specific question. 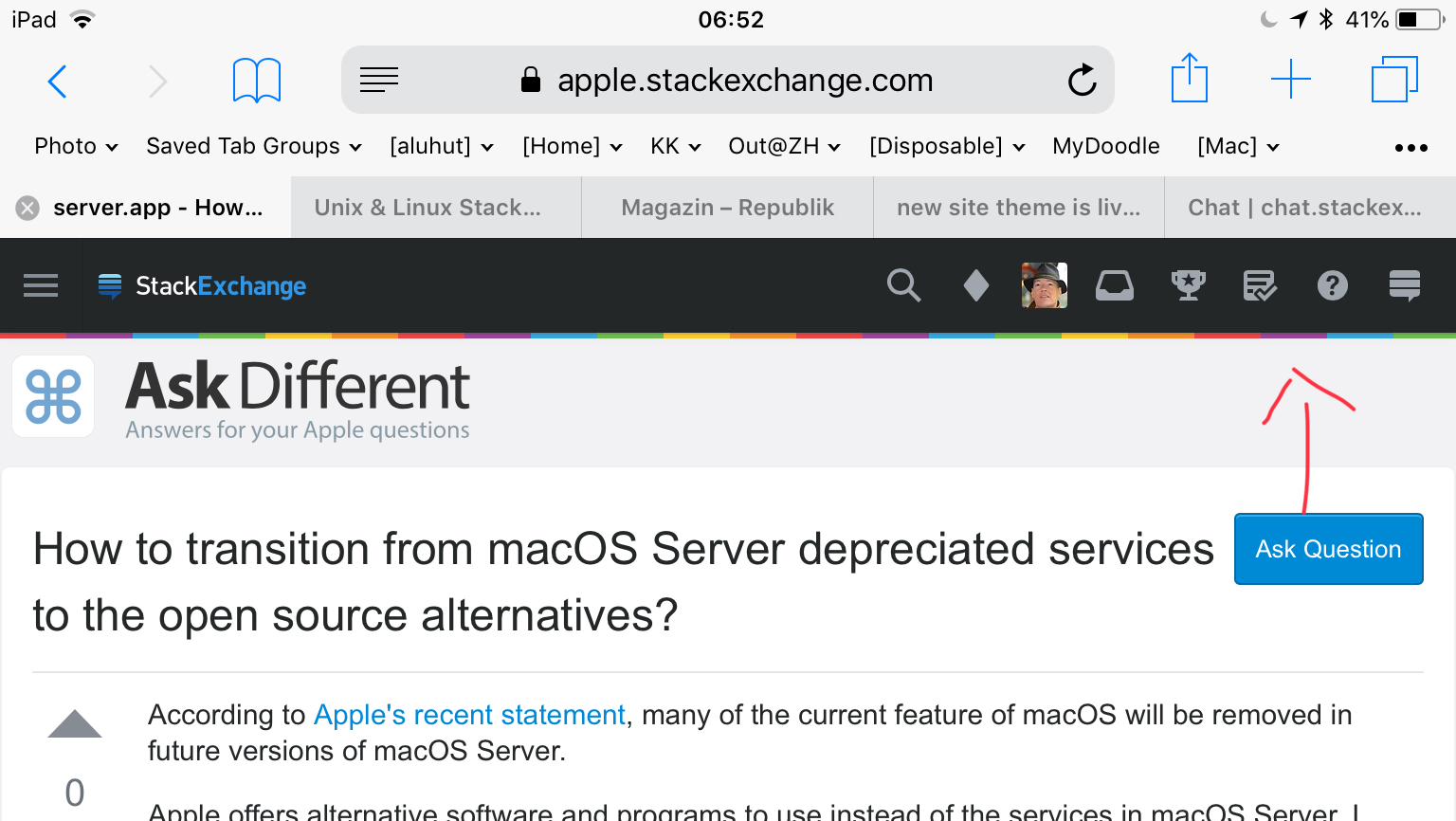 As a first impression, this is… what now?! 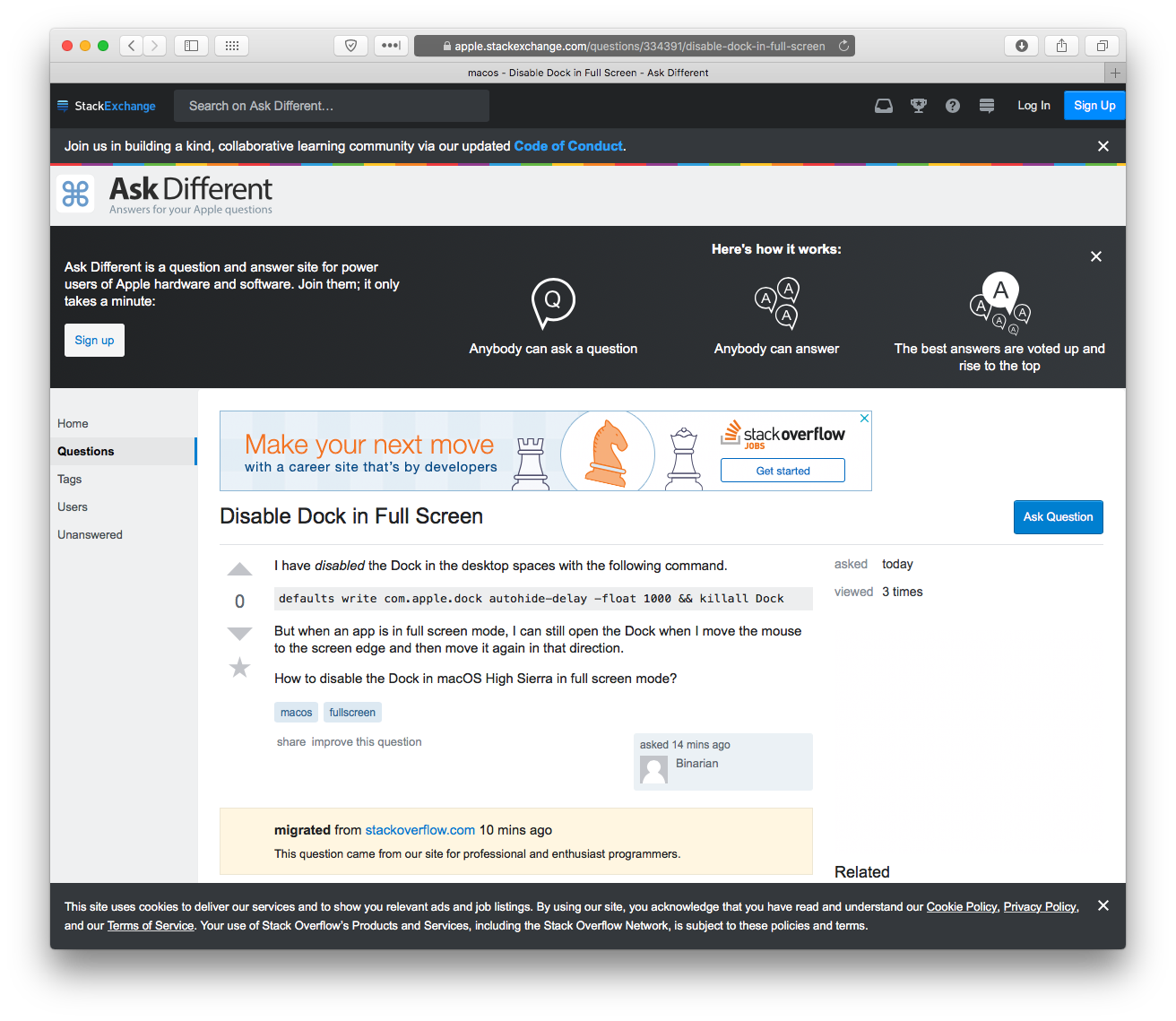 Four different header bars, an ad banner and a footer bar all competing for space, only the third of which tells me the site's actual title (Or is that another ad banner? I have no idea. 🤔), and the actual page content I came for starts somewhere halfway down the screen sandwiched between lots of stuff I don't immediately care about.

This is quite a mess IMO.

Not the answer you're looking for? Browse other questions tagged discussion design .

34
Design for the Apple StackExchange site
12
New Design Launched
24
Please change name of site from "Apple" to "Ask Different"
16
Who is this character with the Ψ and the ♦, running around editing all these posts? (An introduction.)
9
Can one post (assumed) OS bugs and questions about it on Ask Different?
4
Please let us know how the new review tools are working
8
2017 Moderator Election Q&A - Question Collection
6
Is this really our new look?
9
New Ask Different site theme coming soon