This isn't a complaint, just a musing... what made everyone and their dog (or feline companion) vote on the lost iPad question?

How can I prove to an airline that the iPad Mini they found is the one I left on the plane, without giving them the passcode?

I've never gotten more than 20 upvotes on an answer before and those usually take months to even get that high...

The effect you see is (almost) entirely due to the question being on the Hot Network Question list. In the box on the top right, you see that it has been viewed over 10,000 times (as I write this). 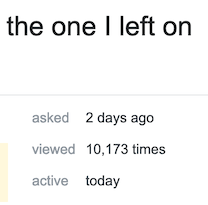 This is not a normal number of views for a question that's not even three days old; most other questions of that age struggle to reach 40 views. (Some of those 10,000 views have come from Twitter, as @nohillside mentions, but those are mostly anonymous users who can't vote.)

Even for a Hot Network Question, it seems to be very lucky. That doesn't really surprise me; it has got a title that's easily understood by users to be a nice 'challenge' they probably never thought of but like to know the solution to. Think 'clickbait', but without the negative connotations. That's why many users click on it, some upvote the question and the answers, and the question stays hot for a longer time, leading to more visits, etc. A self-reinforcing effect. Most other Hot Network Questions from Ask Different have a less exciting title; some examples:

Due to the association bonus, users from all over the network are able to upvote (and not downvote) on Ask Different, even though they have no participation here. That's why voting on questions and answers on the Hot Network Question appears to be skewed.

And yes, sometimes it does feel odd when you get so much upvotes for an answer you wrote in five minutes, while an elaborate answer which took you an hour only gets a handful (or none at all). I usually try to think of that as 'compensation'. In the end, it will all even out.

Often voting is a “pile on” phenomenon here, so some stellar, amazing answers get 3 or even less votes sometimes. The down votes pile easily, but up is much stronger.

I’m not detecting anything odd or gaming the system here.

If anyone ever thinks they’re getting too much reputation from a post, we can make it wiki and the accumulation stops, but I don’t think that’s appropriate here.

-6
How do I ask a question so I can increase my "reputation score"? This seems impossible for a genuine user

4
How to address the XY problem in this question, and a potential problem with one of its answers?
9
Site traffic -> new users -> an influx of invalid spam flags
5
Is having a question with high views and low votes common?
3
Have paid ads for high reputation users been modified?
4
What would happen if a high-rep user or moderator edited a question, and the OP rolled back constantly?
1
Question closed because of incomplete answer elsewhere