The first two answers suggests to use the terminal. Using the terminal isn't the macOS way. It's the linux way. The third suggest it's a bug.

Saying the question is a duplicate is bad advice. This is a novice user, so how are we being nice to the user?

Let's look at option 3. So - if you are trying to make use of the linked article - say that at the start. Explain which specific steps on which specific answer you tried and your results. Once it's clear how you need help understanding or getting past a roadblock, it's no longer a duplicate.

Now - sometimes editing a closed question is hard - there are comments, there are attempts to answer and people are more caught up in what happened to get there and they can't look at the question with new eyes. No problem, just ask a new question - make it well edited - clear and let's see if it's going to avoid closing.

Here is some criticism so you can see why someone would mark it as duplicate:

That statement is literally asking for it to be closed as dupe. Rather than saying "this isn't a dupe" show us in words or pictures how Mojave is different. Show an error message or a screen that changed - show something about the problem you face and don't add "meta" like "this isn't a dupe, please don't close" (You might be surprised how often that happens, and it never makes a question easier to answer and often gets closed as unclear at that point)

That's a statement up to interpretation. Help us help you by clearly explaining why you felt it would be helpful and why it wasn't. Document the problem instead of say "there's a problem" and then leaving it up to anyone's guess as to what you see the problem to be.

You fell into the trap to put what should be a comment into the body - just delete that, it can't make anyone want to vote to reopen since now there's that to clean up once it reopens.

Now for constructive praise, you say here that you have a problem with terminal. That would be excellent to put in the question. At least someone could say - without terminal, you can't do what you want. Better, explain why terminal doesn't work. Every single OS that I know of that's commercial has scripting languages. PowerShell, DOS, AppleScript, bash, python, lisp, etc...

It's opinion whether terminal is Mac like or Windows like or just odd. The fact is terminal exists and is powerful and lets you do things you can't with a mouse and keyboard (other than open terminal, of course).

It's OK to say you don't want to use scripting, but this site allows anyone to answer so even if you don't want that option, your question exists more to help everyone than to help you. The whole reason people answer here is to contribute to knowledge. If you're just looking for 1:1 tech support, I can see how you're disappointed, since that's not at all what happens here.

You get 1:1 tech support when you ask a clear, amazing question and that support is a by-product of the actual good being produced. Open source Q&A that are up to specific documented standards. None of this is a reflection on you - it's OK to want help and it's ok to ask for it just as it's OK for people to vote to close when that makes sense given the site norms and rules.

fwiw, looks like we currently have 6 other "silence your disk is almost full notification" questions according to the sidebar 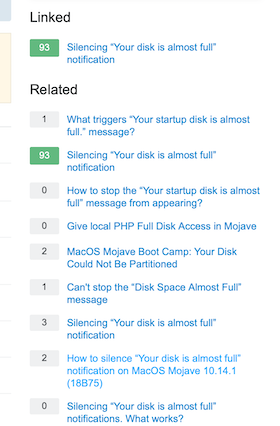 Not the answer you're looking for? Browse other questions tagged discussion unanswered-questions .