I have just answered a question here which related to what version of the Linux kernel would work with a MBP. The question was tagged as Dual-Boot and Unix.

The question was about dual-booting with (any) Linux distro and the answer was 2016 and later MBP are supported after version 5.3 of the Linux kernel.

I tried to correct the tag to Linux but can't. I enter "Linux" and get this: 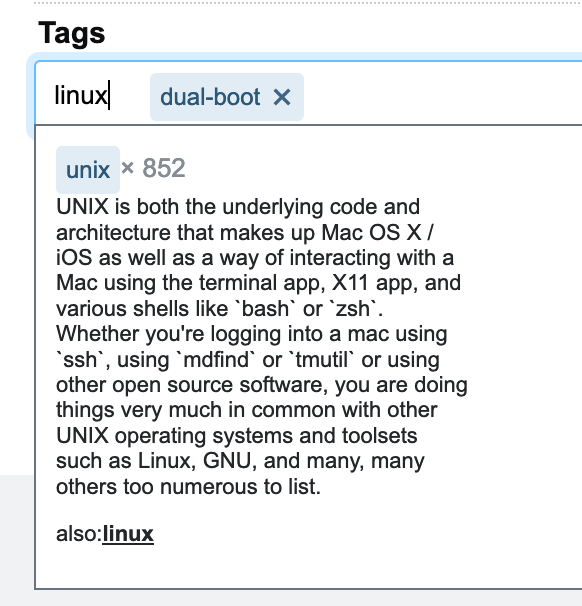 I'm not sure I agree with the description of the Unix tag but in any case it certainly has nothing to do with running Linux on a mac.

Other Unix tagged questions seem to be a mix of other questions about dual-booting Linux and random questions where the Unix tag adds nothing.

Considering there are tags for all versions of Windows (including a generic one) and there are plenty of questions about running Linux on mac would it not make sense to have a Linux tag as Unixis not really applicable in this case.

A similar question was asked previously in meta 3 yeas ago Linux tag = Unix but perhaps it needs raising again.

If it is agreed how would one go about actually implementing it?

Since this is a pre-existing synonym, we would need to form a team to review the questions tagged unix and perhaps re-tag those. That effort would be a considerable amount of work.

Can you make an answer here laying out why we would tag a question as belonging to a build of linux (or if we need tags for each linux build / flavor / distribution) as opposed to having one tag to cover operating systems that are unix based.

That way people can vote up or vote down the specific implementations. I probably will answer one answer saying - "let's keep all the following OS under the unix tag here" so that people that prefer that can vote for that and don't have to down vote your question so let's elect the best option and not just say - no - we won't change it.

The implementation will depend on the design, so let's get a consensus on wha the design / scope of each proposed tag looks like and then move forward with timing based on what design or scope is best liked.

4
Killing the mail tag - Is it time?
3
Adopt a "Create a Tag, Write the Description" Policy
1
Should a question about parsing kext be closed as off topic?
0
Ask Different needs correct tags for 'Mac OS X Server' (10.0 - 10.6) and 'OS X Server (10.7 - 10.9)
2
Filter questions with specific tag literally (excluding synonyms)
3
Inconsistent Tag Synonyms and individual tags for iOS and WatchOS
1
Merge the [refit] tag into [refind]?