Why was this question closed for being "Off topic"?

Yet another, "why was this question closed?" post. Sorry, but I genuinely don't understand this one.

I put posted a Q&A Format question (ie. I answered it myself to share research and knowledge):

What are the major differences between Apple Watch versions?

It was closed for being "Off Topic", and yet less inclusive questions along the same lines are accepted elsewhere on the site:

And they're just three questions to do with the Apple Watch. There are countless other accepted questions asking for feature comparisons between iPhones, iPads, and other Apple hardware.

I feel a question that helps people quickly see the major differences between Apple Watches is useful to users and completely on-topic for this SE. Why am I wrong?

Edit: Just to broaden this outside of Apple Watches. The site is filled with accepted questions asking for tech comparisons. For example, iPhones:

I'm not sure why having so many disparate and separate questions is preferable, when some of these could be collated into a more generalised "canonical wiki"?

I think Stack Exchange Q and A sites in general and Ask Different in particular is generally a bad place for “list all X” questions. Here the question seems to be, let’s crowd source extracting some undefined list of major features from all watches.

On occasion these work well initially, are fun, but the lasting value of curating these makes them poor. Here are two notable lists of things that had very short lives of usefulness IMO. (And you can blame me for both)

I asked this initially when there was zero documentation. Apple didn’t release any info, this list was clearly manually curated initially, now it’s a bad question. Does it serve any real purpose long term? I wouldn’t reverse or object to votes to close it or votes to reopen it. It just is for now.

This might be the most notorious / famous list questions. When I asked it, it was hard to find details and it was focused on sharing things that people learned. It generated a ton of involvement, but in the end - is it practical? I’m not so sure. If it were closed, would we lose anything, I don’t think much if anything.

Back to your Watch question - I understand Apple doesn’t present good summary tables comparing all the hardware, so I would propose we let the community cast reopen votes if needed on your post. I think it’s clear what ground you’re trying to cover as major since you put up a nice answer (thank you). Are you expecting new answers to be added? The close doesn’t prevent anyone from editing the post that is up and visible.

For me personally, I don’t see a reason to override the votes or cast a re-open vote. Let’s see in a week or two how it plays out based on how many edits are needed or if there’s a clear need to get new answers to the post.

Now, the important part is why are some questions poor? I see the ultimate goal here to be to host great answers. If you look at any question in this discussion - ask yourself - does this question make it likely that the answer will be correct and easily answered? Will it still be correct in 6 months or 6 years? That’s the goal of long tail relevance to me when I’m deciding to vote or close or reopen or edit a question. The other goal is anyone can edit and that’s possible on closed questions - editing and voting is allowed - even on hard deleted questions, high rep users can see and edit and vote on them. The questions here are soft closed.

One red flag in my mind is posts in need of a constant gardener to weed out bad answers and infrequently / regularly spend effort to bump and update an answer. As soon as Apple releases new watches, new OS, withdraws old watches - your answer is now wrong or incomplete.

This class of answer is irritating at best, harmful at worst. There’s no way to unify something that changes as fast as hardware on a yearly release cycle from Apple. To counteract this, we are getting more specific about scope of questions.

I’m all for canonical questions on how to figure out the correct answer, but canonical questions that just adapt Or document current state of changing hardware seem less useful to me. I’d much rather someone ask - How can I tell which heart rate monitor is on my watch since I can’t figure out to buy Watch 5 and Watch 4? That is searchable and relevant - even when we are on watch 10 in the year 2025 (or whenever). Expecting someone to find a question titled What are the major differences in Apple Watch versions? and know if it’s software versions, hardware versions, or if major means the pixels on the screen or if it runs without an iPhone seems less searchable to be in general.

This site focusses on finding solutions to practical problems. The three existing questions, while being broad, all ask a specific question about differences between models.

OTOH your question is rather broad and basically asks for a general overview of the differences between the currently known models. This wasn't work very well in a Q&A setup (are you going to extend the answer for future models), it also kind of replicates information easily accessible on https://everymac.com/systems/apple/apple-watch/index-apple-watch-specs.html. And, unless I miss some important detail here, it also doesn't really solve a practical problem as such.

One of the primary goals of the SE platform was for it to become a searchable hub for maintained canonical information. What does this mean? In a post published several years after StackExchange launched, one of its co-founders, Joel Spolsky set out the group's shared vision:

It’s not just a Q&A platform: it’s also a place where you can publish things that you’ve learned: recipes, FAQs, HOWTOs, walkthroughs, and even bits of product documentation

The aim was to solve was the problems faced by other Q&A platforms. Joel uses Usenet as an example: People joined the group and asked the same questions over and over, which resulted in frustrated readers and admin. Usually it led to moderators manually creating FAQs to repeatedly direct new users to.

With StackExchange, the idea was to avoid that ever happening, and with the learning from StackOverflow, they started encouraging users to "answer their own questions", to "edit questions to make them more widely applicable", and help make SE sites "encyclopaedias of useful information".

Essentially the goal of a SE site is to "build up a library of canonical questions and answers that are more generic versions of the same question" (to quote Joel), thus allowing the closing of duplicates.

In short: If similar questions can be turned into a more generic and inclusive versions, then they should be.

In other words, it should be less "What Marvel film should I watch after Iron Man?" and more "What is the Marvel Cinematic Universe viewing Order?"

And contrary to bmike's answer, I find that "What are the differences between Apple Watches?" to be eminently searchable. 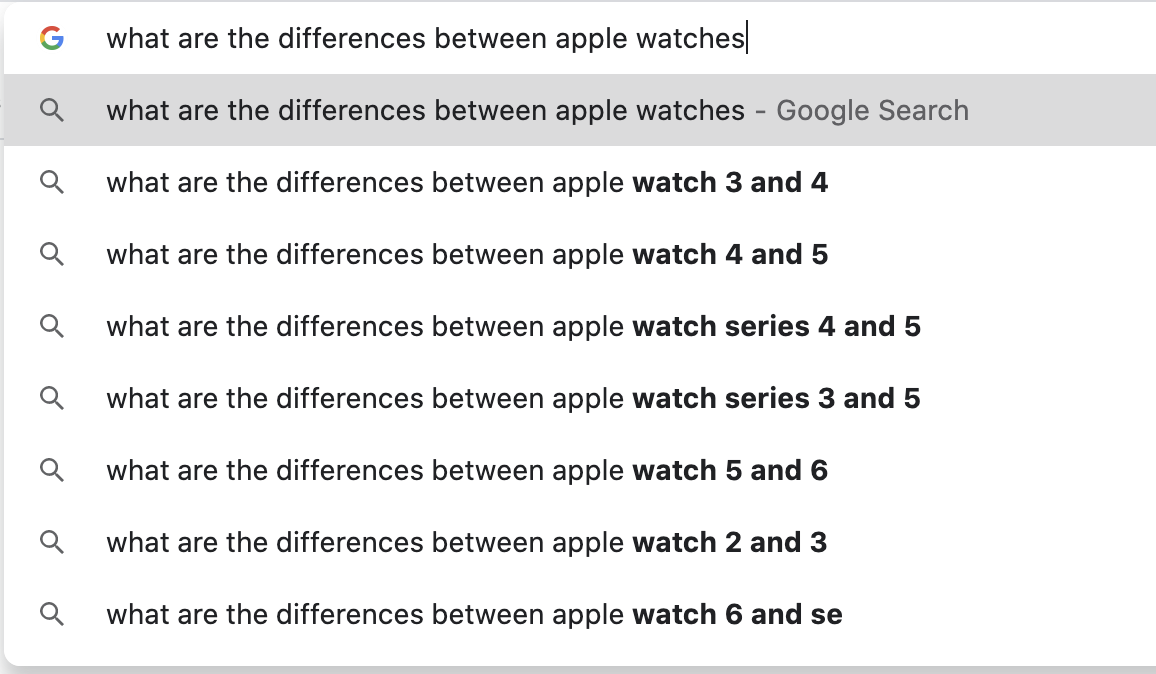 2
Are product designation or naming questions appropriate here?
2
Why was my question about watching videos on iPad voted down?
1
Why are some iOS7 questions closed and others left open?
5
Why does the FAQ say "asking how/why Apple does <some thing XYZ>" is off-topic?
3
Why is my question being voted closed as duplicate, when I have made it clear that it's not?
3
Why was this question not closed?