Clarify difference between "reputation" and "score"

As Glorfindel points out, I was completely confused about the difference between "reputation" and "score", leading to the post below. I have been using StackOverflow for over 10 years and still did not know this, so I am making this a feature request for better documentation and clarification in usage. One possibility is something along the lines of a "score" label that links to an explanation of what a "score" is, and something similar for "reputation". Certainly, including a link to a definition of "score" in the badge requirements definition would be nice.

My profile shows inconsistent reputation about the macos tag. This image is a composite, since I could not get 2 tooltips to show up at once. I pasted the "Reputation gained..." tool tip on top of the screen shot showing the "Asked 4 non-wiki..." tooltip. Otherwise, the only alterations are the red arrows and text I added to point out the problem. 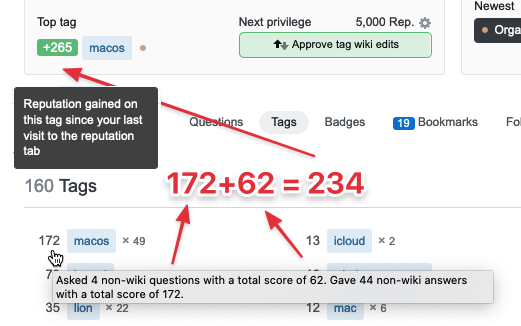 I can believe there is some delay in updating the "Tags" tab versus updating the main "REPUTATION" box, but I promise you I did not earn all those points in one day. It is now 2 days later and the total shown in the tags Tab still adds up to less than 265.

I imagine the cause is that the points shown in the Tags tab does not include bounties, while the number shown in the reputation box does. If that is the case, it should be documented.

It also should be documented if bonus points do not count toward tag badges. By that I mean that the current requirement for a bronze tag badge is stated as "You must have a total score of 100 in at least 20 non-community wiki answers to achieve this badge". I guess that excludes bonuses, but without stating that, I read it as including them. I am a little interested in earning badges so it would be good to know that chasing bonuses will not help.

Yes, there is some caching of tags scores; these are calculated every day in the UTC morning.

But I think you're already confused by the difference between reputation and tag score. An upvote gives you 10 reputation, but will only count as +1 to the tag score (and that only if it's an answer). Accepted answers give 15 reputation but don't count towards the tag score; the same with bounties. For a bronze tag badge, you need 100 upvotes (more if you get downvotes as well) so that usually amounts to 1000 reputation (unless you hit the daily reputation cap). I see you have a bronze macOS tag badge already.

I've never found that +265 counter helpful; once you click on the reputation tab it's gone.

Not the answer you're looking for? Browse other questions tagged feature-request .

3
Adopt a "Create a Tag, Write the Description" Policy
4
Plural guard registering false positives on this site
0
Ask Different needs correct tags for 'Mac OS X Server' (10.0 - 10.6) and 'OS X Server (10.7 - 10.9)
3
Should Civic Duty and Electorate be put between the same hr tags in the Badges list?
1
Emojis usage in Comments and Answers?
3
Merge contacts.app and address-book tags
1
Make [watchos-*] tag synonyms of [watchos] to be consistent with [watchos-3]'s status
3
Inconsistent Tag Synonyms and individual tags for iOS and WatchOS