I began asking a question, that was more experience sharing, because I didn't know what the question was. After much terrible story telling and things I may have only wrote because they somehow chronologically make sense to me in to hope of figuring out my question.

Terrible question, but my train of thought did leave me to a question that is measured by my system and varies majorly when using a third-party device.

It's late, and I don't want to think about it anymore. three are a small number of issues causing bizarre behavior, even to the point of RMAing my MBP 16, but I don't think it's the problem I just don't feel like rewriting my question, even though it's pretty concise and an entirely new inquiry.

But where's the save draft for later?

I recommend a user space where a collection of thoughts can be returned to. Because that's how life and the mind are. Make it simple and private, or make it collaborative by invitation or something.

But where's the save draft for later?

There is no such button because it is automatically saved. This happens on the server and the draft is tied to your account, so if you use another browser or another device, you can continue writing. It also works for answers.

The draft has a lifetime of 7 days and you get one question draft only at any point in time; if I need to store something for a longer time, I usually use Apple's Notes app, or a GitHub gist which supports Markdown.

While looking for my deleted question much to my surprise all of my deleted and forgotten questions.

There are five of them, and one banish with true vitriol, a negative six!

This is probably a better home for them looking back. 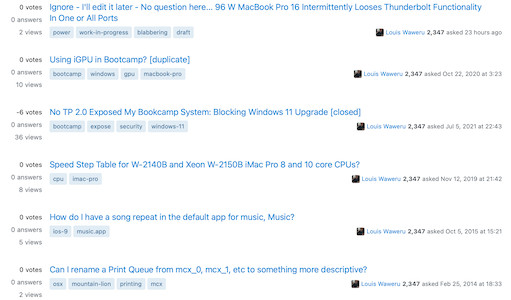 Do I win an Easter egg?

Not the answer you're looking for? Browse other questions tagged .

0
Should I receive a notification for my “upvoted" comments?
4
Can the slug for migrated questions be updated to match the current FAQ?
2
CAN WE PLEASE BLOCK TITLES WRITTEN IN ALL CAPS?
6
Adding hints for including code in questions about scripting