My account was blocked for arbitrary reasons. I asked about real problems and other users confirmed they had the same problems. Of course most normal people would and should express frustration when they pay for very expensive equipment and software and then can deterministically reproduce that it crashes.

It seems that my question was downvoted and my account was blocked not because the questions were wrong, but simply because of the tone of my writing where I complain for a good reason.

The specific question does not leave out the details. It contained the most detailed description there can be, namely a stacktrace with all the details. Two or three sentences described my frustration with a crashing program. That has been done 1000s of times that a user writes about his frustration with trying to solve a software problem. It could have been edited instead of punishing and blocking me for it.

Then stating that an effort from a user to help or address the issue "makes no sense" is clearly judgemental and not part of solving the problem, it seems that completely honest attempts to solve a real problem are being rejected and blocked completely arbitrary when both the problem and the attempts to solve it are 100% honest and genuine efforts. 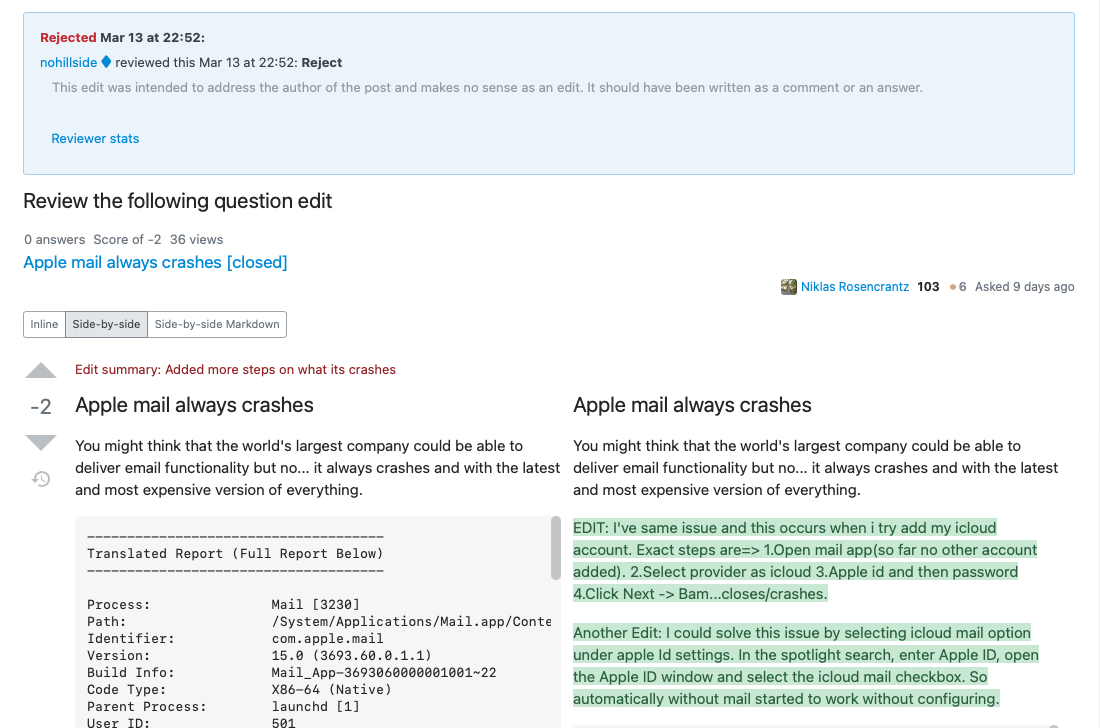 I‘ve undeleted the question so others can have a look themselves (Apple mail always crashes). The comment left by another user there seems to be spot-on though:

Even if you're angry, please describe your problem in a neutral tone. Nobody likes to read rants, you're far less likely to get a useful response this way. Also, please post more informations about your issues. For example, specific to this question: does it crash when you start the app, or when you do something specific, is there something else worth sharing? Just "it's crashing, here's a crash log" is just not enough info to work with.

As you show in your post above there was an edit made with some details. But based on the edit history it was done by another user, so we have no way of knowing whether the edit describes the same issue as you experience (which is the reason the edit was rejected).

If you can add your own details to the question, please do so (and flag for mod attention afterwards so it can be reopened).

Not the answer you're looking for? Browse other questions tagged support moderation specific-question .

3
Question was locked and put on hold, but the banners only show 'on hold' and migration
1
Bounty expired without good answers, so did some digging and found the correct answer. Now what?
7
My iOS syncing headaches is a “White Elephant.” Can anything be done to reframe the question?
1
Rephrase 'Basic Customer Support' off-topic wording
1
Question about Ask Different account merging
2
New answer, comments, inbox message disappears - deleted?
1
Request to merge questions on slow Finder updating
2
Community approach to legitimate quasi-astroturf answering trends
3
Should one remove me too part and hope it helps part from an answer?