Not a lot of final cut pro questions here...

I don't see a lot of questions (or answers) about Final Cut Pro X on the Apple Stack Exchange, and want to do something about that. 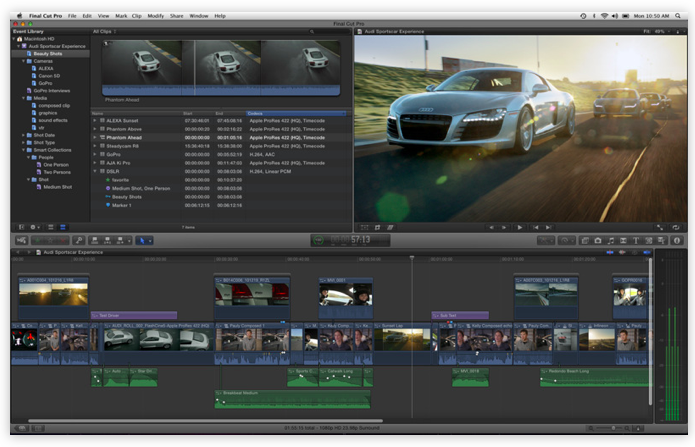 please answer this question. Early this week we will be sending out free, fully-licensed copies to the first 5 people who qualify.

I regularly do software demo videos, screen casts that I splice together with audio and music. I do these with iMovie now. I would do them with FCPX if I had a copy. :)

If you:
regularly do video editing

I do video editing in school quite frequently, and haven't used anything better that iMovie (other than using FCP a few times on my friend's Mac). I would definitely want to try using FCP X for video editing.

don't yet have a copy of Final Cut Pro X

I don't have a copy of Final Cut Pro X.

would use one if you got it

I would use it, since iMovie lacks the tools which I need

Of course, since the software already looks difficult to use :P

I'd be glad to participate :)

I would be very happy to participate!

There was a point when I looked into film production as a career, chiefly by starting my own production company, even going so far as to acquiring FCP when it first released along with some production equipment. I had done some work, but it was a lack of people resources that kept me from getting too far, so I put everything down and went forward with more stable ventures. That was about ten years go but I have still dabbled here and there in video and audio production as I got into multimedia for educational products.

Now, I really just want make videos of my kid(s), if only for the fact that my out-of-state and out-of-America family (which is pretty much everyone) has been practically begging for more videos. Using iMovie is a real drag, to me at least, I think because my first work with video was using Final Cut Pro. Using FCP compared to iMovie is a completely different mindset, one where I actually felt overly-guided in iMovie. I have read from a couple different sources speculation as to why FCPX wasn't released as a new version of FCP Express or a prosumer version of iMovie. It's an interesting point, and I have been wondering just how valid that really is.

Therefore, I would like to give this a go, should I qualify. I have a couple months before classes start again, and I would love a copy of FCP to work with for the benefit of familial relations and Ask Different promotion.

If this isn't over yet I would be interested in participating. I don't 'regularly' edit video, most of what I do in iMovie is home videos but I recently acquired a large collection of old super 8 film that needs to be sliced and diced.

I pretty regularly check Ask Different. I was a little more active today than usual but today is also Lion day.

I don't have a copy of FCPX, but would definitely use it if I had it.

I already have a few questions in mind for FCPX like: How picky is the Content Auto-Analysis, do people have to be in the shot the entire time for it to tag it properly? Same thing for zooming in on the subject, it is tagged as wide, medium or closeup?

I would be happy to help too! I really enjoy video editing. I use iMovie (not that much anymore), FCE 4, iDVD, and have used DVDSP some. And I would love to get a copy of FCPX because I don't have multi-cam editing on FCE (something which Apple has promised will come out in spring 2012)

This may be slightly late, I would happily participate in this.

I have a qulaification in Media production, which includes Video production. I use After Effects to create special effects as seen here on youtube.

14
Should we perhaps upvote some more?
7
Podcast #3: iMac upgrades, Spotlight tips, Tiny Wings
7
Podcast #5: MacDefender, Lodsys, Handbrake
7
Podcast #8: Project Spartan, Hardware Durability, Divvy
16
Who is this character with the Ψ and the ♦, running around editing all these posts? (An introduction.)
4
Why can't I do anything on this site?
14
What is wrong with my questions to warrant being downvoted?
9
New Ask Different site theme coming soon
7
2021 Moderator Election Q&A – Question Collection
2
Why is it hard to get answers and responses here? Or is this a false impression?